McCain: Send U.S. Special Forces to Rescue Nigerian Girls, “I wouldn’t be waiting for some kind of permission from some guy named Goodluck Jonathan,” 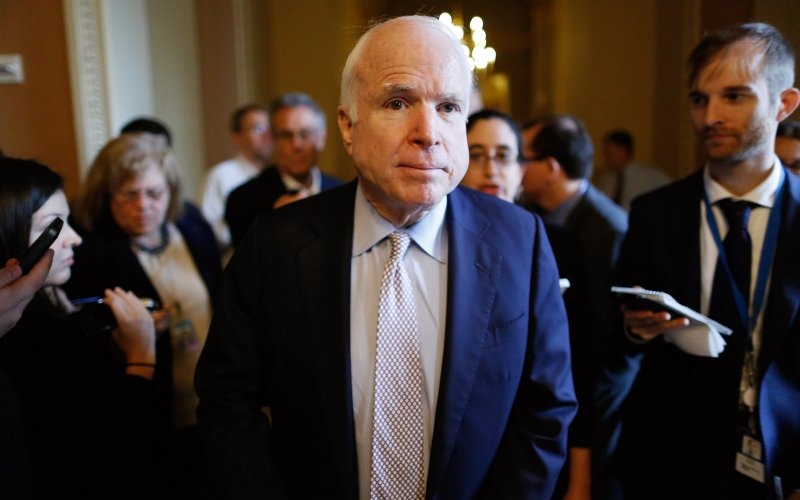 The United States should send in special forces to rescue the hundreds of girls kidnapped by Boko Haram—whether the Nigerian government gives permission or not, according to Sen. John McCain.

“If they knew where they were, I certainly would send in U.S. troops to rescue them, in a New York minute I would, without permission of the host country,” McCain told The Daily Beast on Tuesday. “I wouldn’t be waiting for some kind of permission from some guy named Goodluck Jonathan,” he added, referring to the president of Nigeria.

Of course, it’s not exactly a surprise that McCain holds this view. He’s been a longtime advocate for increased U.S. military activity in crises around the globe—from Syria to Ukraine.

McCain said that if he were the American president, he would already be doing several things to respond to the kidnapping of the over 200 girls by the Nigerian terrorist group that the Obama administration has so far declined to do. Those measures include prepositioning U.S. special forces to be ready to enter Nigeria and rescue the girls if the opportunity arose. He said that the United Nations charter authorized military intervention on behalf of the girls because their abduction rose to the level of “crimes against humanity.”

The U.N. Charter does not explicitly mention crimes against humanity. But the Rome Statute of the International Criminal Court Explanatory Memorandum does, stating that crimes against humanity “are particularly odious offenses in that they constitute a serious attack on human dignity or grave humiliation or a degradation of human beings.”

McCain’s declaration Tuesday was an amplification of an interview he gave to CNN last week when he said, “As soon as we knew these young girls were kidnapped… we should have utilized every asset that we have, satellite, drones, any capabilities that we had to go after them.”

“If they knew where they were, I certainly would send in U.S. troops to rescue them, in a New York minute I would, without permission of the host country.”

The State Department said Monday that the United States is now providing reconnaissance overflights and satellite imagery to the Nigerian government to aid the search for the missing girls. The U.S. has also deployed about a dozen additional military advisers to Nigeria to aid in the search effort, bringing the size of the total U.S. team on the ground to 27.

The Obama administration has said repeatedly that its efforts to help the Nigerian government counter the threat of Boko Haram over the years have been hampered by that government’s refusal to accept various offers of U.S. assistance.

State Department officials also claim that Abuja’s opposition was a key factor in their decision to refuse to officially label Boko Haram as a terrorist organization in 2011 and 2012.

McCain said that Washington should not worry if the Nigerian government wanted U.S. forces to enter Nigeria and rescue the girls because Abuja would be happy with the outcome.

He added that there would be praise for such an intervention in Washington as well.

“If we rescued these young girls, it would be the high point of the [President Obama’s] popularity.”

Sen. Bob Corker, the ranking Republican on the Senate Foreign Relations Committee, told The Daily Beast on Tuesday that he would consider the use of American military forces to rescue the girls, but he placed more emphasis on working with the Nigerian authorities.

“I’m very open to us doing a lot more than what we’re doing. I think we should consider Special Forces.” Corker said. “The government of Nigeria itself should be open to that, I think it’s important that the host country welcome our efforts.”

Spread the loveBuhari’ government through the ministry of finance took END_OF_DOCUMENT_TOKEN_TO_BE_REPLACED