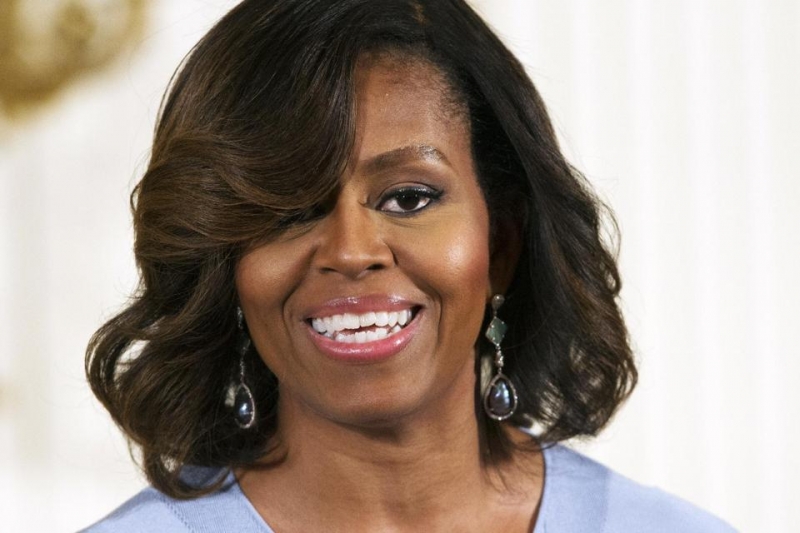 Michelle Obama on Saturday criticized the kidnapping of scores of Nigerian schoolgirls as an "unconscionable act" carried out by a terrorist group she said is determined to keep them from getting an education — "or grown men attempting to snuff out the aspirations of young girls."

Taking over the president's weekly radio and Internet address on the eve of the American holiday for honoring mothers, the first lady said that, like millions of people around the world, she and President Barack Obama are "outraged and heartbroken" over the April 15 abduction of the girls from their dormitory.

"In these girls, Barack and I see our own daughters," Mrs. Obama said, referring to Malia, 15, and Sasha, 12. "We see their hopes, their dreams and we can only imagine the anguish their parents are feeling right now."

What happened in Nigeria is not an isolated incident, the first lady said, but is "a story we see every day as girls around the world risk their lives to pursue their ambitions."

Mrs. Obama mentioned the case of Malala Yousafzai, the Pakistani teenager who survived being shot in the head as she traveled to school in 2012. Malala has become an outspoken advocate for the rights of all girls to get an education, the same message Mrs. Obama delivered in her first solo address to the nation.

Mrs. Obama noted that more than 65 million girls worldwide do not attend school even though educated women earn more money and have healthier families.

"When more girls attend secondary school, that boosts their country's entire economy," she said. "So education is truly a girl's best chance for a bright future, not just for herself, but for her family and her nation."

That is also true in the U.S., the first lady said. She expressed hope that what happened in Nigeria will inspire boys and girls across the U.S. to be serious about getting an education.

"I hope that any young people in America who take school for granted, any young people who are slacking off or thinking of dropping out, I hope they will learn the story of these girls and recommit themselves to their education," she said.

Mrs. Obama recently launched a domestic initiative called "Reach Higher" to encourage young people to pursue education beyond high school, whether they enroll in a professional training program or attend a community college or a four-year institution.

In Saturday's address, the first lady asked the nation to pray for the Nigerian girls' safe return.

"This unconscionable act was committed by a terrorist group determined to keep these girls from getting an education — grown men attempting to snuff out the aspirations of young girls," she said. "Let us hold their families in our hearts during this very difficult time, and let us show just a fraction of their courage in fighting to give every girl on this planet the education that is her birthright."

Authorities have said more than 300 girls were abducted from their school in the country's remote northeast. Fifty-three escaped and 276 remain captive.

President Obama said this week that the U.S. will do everything to help Nigeria find them.

Mrs. Obama added her voice this week to the calls for the girls' safe return by tweeting a photo of herself in the White House. She appears sad and holds a white sign with the message "(hashtag) Bring Back Our Girls." The tweet was signed "-mo," indicating that she sent it herself.

Boko Haram means "Western education is sinful." The group's leader, Abubakar Shekau, has claimed responsibility for the abduction and has threatened to sell the girls.