Obasanjo – Ribadu Created Enemies for Me 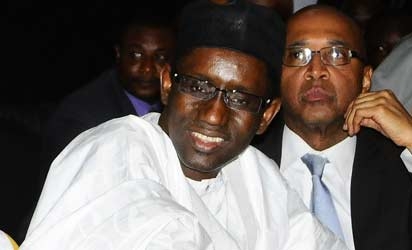 Former President, Chief Olusegun Obasanjo, has said the ruthless manner in which the former chairman of the Economic and Financial Crimes Commission (EFCC), Mallam Nuhu Ribadu, carried out his duties created enemies for him in the country.

Speaking at the weekend in Ethiopia during the Third Tana High Level forum on Illicit Financial Flows and Governance of Natural Resources, Obasanjo said the ruthlessness with which Ribadu went about his assignment in tackling the alarming rate of corruption in Nigeria caused the EFCC at the time to also investigate him and other people close to him, including his late wife, Stella, despite the fact that he was the president.

Acknowledging that fighting corruption genuinely creates a lot of enemies, Obasanjo, who said he was not afraid of those perceived enemies who are still alive in Nigeria, added: "It is rather them that fear me."

Speaking on vested interests in the anti-corruption crusade, Obasanjo revealed for the first time how Ribadu was once poisoned, saying it was a very serious case that was "a matter of life and death".

Noting that he made it clear to Ribadu that there should be no sacred cow in the fight against corruption, the former president said following this note of warning to the former EFCC boss, Ribadu took the investigation to his door steps, probing him, his close associate and his late wife, Stella. According to the News Agency of Nigeria (NAN), the former president also disclosed how a serving minister who was his senior in secondary school was indicted and prosecuted by the EFCC under Ribadu and when the minister was found guilty, "there was no issue of senior again".

Obasanjo, who is also the chairperson of the Tana Forum, said he supported Ribadu during the anti-corruption fight, as there was the need for willing political leadership at the highest level.

Adding, however, that the executive needed the relevant legislations to work with, Obasanjo further disclosed his experience with the bill establishing ICPC, which according to him, was whittled down by lawmakers who felt they might be victims of the law.

In his address, the Prime Minister of Ethiopia, Hailemariam Desalegn commended Ribadu, who was a speaker at the event for his presentation, which he said highlighted the many good things about Nigeria as opposed to what is projected in the media.

Ribadu, who had earlier offered measures African countries must follow to tackle illicit financial flows and repatriate money already illegally taken out of the the continent, said what Africa needs is honest and committed leaders who will set examples with themselves by eschewing corruption and close avenues of illicit financial flow.

He observed that it is the seriousness and commitment showed by the political leadership that would convince other foreign countries to work with them towards recovering looted monies stashed abroad.

Spread the loveOf all the updates that have been given END_OF_DOCUMENT_TOKEN_TO_BE_REPLACED

Spread the loveEach generation must out of relative obscurity, discover END_OF_DOCUMENT_TOKEN_TO_BE_REPLACED

Spread the loveThe formulation and expected evolution of anything that END_OF_DOCUMENT_TOKEN_TO_BE_REPLACED