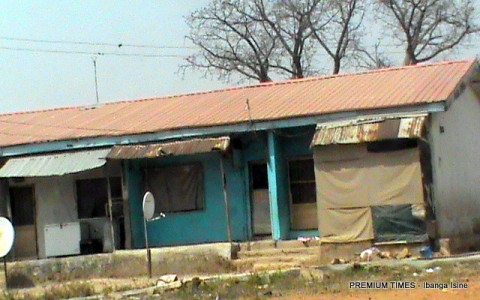 The Nigeria police, especially the rank and file, are the least paid among corresponding security agencies in Nigeria, a failing that fuels corruption.

Sylvanus Udo has a telling way of explaining how to keep a wife and four children, pay for the children’s school fees, rent an accommodation and buy food for years with a little more than N40, 000 – his take home pay after 25 years as police officer.

“Only through black magic could anybody feed his wife and four children for 30 days with the kind of salary the Nigeria Police pays me,” he said recently.

His colleagues with accommodations in the police barracks, part with additional N7, 000 for that privilege and go home with even less monthly.

Tens of thousands of officers of the Nigerian police receive some of the poorest pay even in the West African sub-region, and the worst hit are the rank and files-the force’s foot soldiers who spend decades in the line of duty but are hardly promoted, accommodated or paid well.

Across Nigeria, wretched officers live in squalid neighbourhoods within and outside the barracks, live and go to work for months from broken-down vehicles, uncompleted buildings and garages. Analysts believe the dismal reward package contributes directly to the alarming rate of corruption in the force and rampant attack on civilians by personnel.

While Nigeria also reviewed the salaries of its police about the same time as Ghana, the raise could hardly compare. The Consolidated Police Salary Structure, CONPOSS, released in March 2011 and exclusively obtained by PREMIUM TIMES shows a marked difference.

Still, the salary of the Nigerian Inspector-General of Police, IG, is meagre compared with those of the heads of the State Security Services, SSS, National Intelligence Agency, NIA and the Economic and Financial Crimes Commission, EFCC.

The sergeant’s story in many ways reflects the deplorable conditions thousands of Nigerian police personnel face daily amid rising corruption and declining productivity in the force. Mr. Udo refused to be fully identified for fear he might be penalized by his superiors. His first name was replaced with Sylvanus for this story.

Before being posted to Ikeja, the sergeant served in Ikorodu where he was allocated a one bedroom apartment in the barracks. But in Ikeja, which has the highest number of police personnel in Lagos, he could not get a place in the barracks.

With Ikeja’s high rental rates, he did what many of his colleagues have done overtime –erect a makeshift structure within the barracks to accommodate his family, after tipping a corrupt senior officer N10, 000 for a few square meters of land near the ravine area of Ikeja barracks. With the help of an itinerant carpenter, he constructed a “house,” using pieces of woods, discarded billboard tarpaulins and used zinc sheets.

To avoid the usual squabbles associated with using the single toilet and bathroom shared by many residents of the barrack’s ghetto, the sergeant wakes up early for bath long before others get off from bed, and hurries out for work immediately where he stays mainly standing till about10.pm.

“Nobody gives me a sachet of water to quench my thirst, nobody provides me with a lunch pack to quell my hunger, but everybody blames me if I make a slight mistake,” he said.

Mr. Udo joined the force in 1989 with the West African School Certificate, WASC. His last promotion was in 2002, having waited for eight years to be made a sergeant. Twelve years on, his name has consistently missed out from promotion lists.

But in spite of the appalling working conditions, the sergeant remains grateful for his job and considers himself lucky to serve a nation he says has failed to appreciate its police men and women.

“I thank God I have this job. It is what brings me happiness and satisfaction. I love to serve and I am proud to stand under the sun and in the rain to ensure people move freely on the road,” he said. “Even though they have refused to promote me after so many years, I still put in the best to ensure the road is safe.” While submitting a report on suggestions on improving the welfare of the Nigerian police personnel in 2012, former Chairman of the Police Service Commission, Parry Osayande told President Goodluck Jonathan how police in Nigeria were the worst paid in the West African sub-region. Mr. Osayande’s report only drew from several past documents from government panels identifying poor remuneration and conditions of service as factors affecting performance in the force.

“The poverty of the ordinary police officer, coupled with weak institutional governance predisposes him to engaging in all sorts of schemes for self-help and survival. While parallel organisations carved out of the police only perform part of its functions, their staff are better remunerated and motivated than the police,” Mr. Osayande noted.

He called for urgent review of working terms to boost performance, instil discipline and restore the dignity of the police officer. The report, like the rest, remains unimplemented two years after.

The shocking conditions at police barracks are evident around the country, even in the federal capital, Abuja. Yet, if the decay in the barracks is tolerable, it is more serious at police training schools.

The Police Training School, Bauchi, cuts a picture of a broken down goat pen, but the facility trains thousands of officers during promotion examination.

The CLEEN Foundation, a nongovernmental organization which has conducted years of research on the Nigeria police, painted a gloomy picture of condition at police stations well-known to Nigerians.

“Over the past six years, we have conducted police station visits and in the course of conducting these visits, we have seen the good, the bad and the ugly side of things,” said Kemi Okenyodo, the group’s executive director.

In a few instances where police stations are improved, such efforts are often communal, Ms. Okenyodo said. Examples are Ajah Police Station and Mosafejo Police Station, all in Lagos State.

While the military and other paramilitary agencies provide funds for their officers on special operations, the police hardly does. Where such funds are provided for, it takes months and years to trickle to the rank and file.

A police officer in Umuahia, Abia State, told PREMIUM TIMES that he buys his uniform, and shoes from Ariaria Market in Aba.

“In the past, they used to issue us with uniforms, badges and shoes but that has stopped a long time ago. Most of us buy our uniforms and shoes in the open market. For instance, I bought my uniform and shoes in Ariaria Market in Aba,” he said.

He explained that the non-availability of uniforms and shoes in the police store is responsible for the lack of uniformity in the dressing of personnel, especially the rank and file.

Retired FTC Commissioner of Police, Lawrence Alobi, blamed the Federal Government for the disgraceful condition of the Nigeria Police.

“In the United Kingdom, UK, policemen earn more than some members of the Armed Forces. In fact, when former British Prime Minister, Margaret Thatcher, was asked why a Chief Constable earned more than her, she was quoted to have replied, ‘if the chief constable does not maintain law and order, we cannot sit in parliament’,” Mr. Alobi said.

“The police never went on strike, except in 2003 when just a handful embarked on an industrial action. In this country, the Army has taken over the government, workers have gone on strike. The police officer is 24 hours on duty and is the least paid. We do not even have a union that can at least negotiate our salary. In Canada, Ghana and South Africa, the police have a union. Here, we don’t and that makes our case very precarious. We are at the mercy of the politicians who manipulate us,” he lamented.”

The Nigeria police loses either ways, analysts say. Without a union to project its concerns, the force also lacks a crucial support from the public in agitating for reforms; a partnership that is missing with the force’s corruption, and its overzealous officers’ daily assault on members of the public.

“We must also factor in the public perception of the Nigeria Police. If there is a crime in a neighbourhood, people no longer have the confidence to call the police but will call the Army. People now have more confidence in the Army than the Police. This is because of the level of impunity and corruption in the police,” said Uche Duruke, the national president of Civil Liberties Organisation.

“I was in a place where the issue of poor salary for the Police was discussed and somebody jokingly said, ‘will they take double portion,’ apparently referring to the bribes some of them take at roadblocks. It was like a joke but he made a valid point.”

Repeated attempts to speak with the Police Public Relations Officer, PPRO, at the Force Headquarters, Frank Mba, were unsuccessful.

Mr. Mba did not respond to questions when contacted on the phone nor reply to questions he requested to be sent as text to his telephone.

This post is supported by the Nigeria Stability and Reconciliation Programme, funded by DFID and managed by a consortium led by the British Council