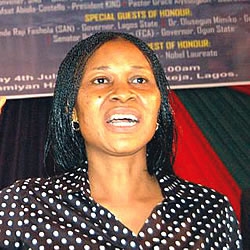 Nigerian women, under the aegis of Women Arise have vowed to mobilize for mass protest against the Nigeria Police after a mobile police officer tortured two women in Lagos recently.

A video clip of an officer of the Nigerian Police Force, identified Nasir Muhammed, beating and torturing two women went viral on the internet recently, eliciting public anger against the police over the dehumanising treatment meted out to the women.

National President, Women Arise, Dr. Joe Okei-Odumakin demanded that the erring officer, Muhammed, must be helped with a psychiatric check, saying that “we need be sure that men recruited into our police force have no traces of mental disorders.”

She noted that the victims must now be taken up by the police, properly treated and compensated as Women Arise is still in touch with the victims and they have still not been contacted by the police authorities in the wake of the barbaric act.

“The erring police officer must be immediately dismissed. We must make good example of him to deter other officers who act with impunity, oppress citizens arbitrarily, or have disposition to do so,” she said.

“We have resolved to mobilise Nigerians to a protest against the police force on this singular act if the demands are not met. We enjoin all members of the Nigerian public to brace up for an impending mass protest should the police play family politics with this case,” she stated.

Okei-Odumakin said Women Arise condemns strongly, the dastardly oppression of non-offending citizens with the police weapons, illegal detention of people to command undue fear and callous use of official power by the police, military and other agencies of government.

“Women Arise is grieved by the increasing spate of horrible, terrible and awkward show of muscle by men in police uniform, lately. We saw with pains, the deployment of State weapons in assaulting unarmed citizens.

“We observed with despondency, the unwarranted oppression of innocent citizens as depicted in the horrible video, which also involved dipping a victim in muddy water. At Women Arise, through diligence, we have located the victims and interviewed them for details of their torturous experience.

“From our interview of the victims, it is part of our findings that the victim had internal injury from the torture. We also found that the food seller, whose business policy of selling fish only to those that buy food from her, caused the policeman’s unwarranted fury, was further illegally detained, after the brutal torture,” she said.

She said after investigation, Women Arise immediately contacted police authorities at the Federal level to ensure that the erring officer was taken up for mental check, and official status to be sure he is a true officer in the Nigeria Police Force, discipline and other further actions deemed necessary by the police to protect the victims and other citizens who may be potentially unsafe from continued exposure to the erring officer.

“We were assured that the issue was being taken up by the police. We obtained police statement thereafter, mentioning that the erring officer has now been arrested. Henceforth, it has now become unacceptable and offensive to us, for police officers to turn their official powers into what they personally use to intimidate, harass and torture the people they are recruited and paid to protect.

“While we praise the role of the Nigeria Police Force in the arrest of some of the Ejigbo Pepper Sodomy perpetrators, which we are still working co operatively with the police on, we ask that this is not treated like a family affair. Violence is nothing to make family clique over,” she added.

Spread the loveAs the nations of the world endeavor to END_OF_DOCUMENT_TOKEN_TO_BE_REPLACED