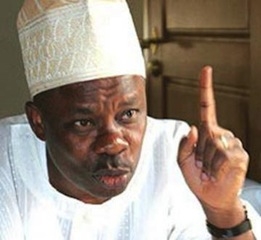 The All Progressives Congress (APC) Local Government Congresses in Ogun State ended in controversy as there was no consensus on council executives to be elected.

Infact, there were reports of parallel congresses being held by the faction loyal to Governor Ibikunle Amosun and another to former governor and national leader of the party, Aremo Olusegun Osoba.

The Congress Committee sent by the party’s National leadership from Abuja had announced that the congresses would commence by 10:00am but in most of the local government areas it did not start until after 12noon.

Gov. Ibikunle Amosun: said he was not aware of a parallel congress in the state

In all these council areas, the congress was marred with protests and violence as the factions held different elections.

In Ogbere,the headquarters of Ijebu East local government area, three persons were macheted and rushed to the hospital.

A member of the House of Representatives representing Ijebu North/ Ijebu East/Ogun Waterside, Abiodun Abudu Balogun described the incident as unfortunate, adding that the Congress Chairman should be held responsible for it.

“You can all see by what the Congress Chairman, Hon.Ope Salami has done. He connived with the governor and the council chairman, Ogunde, to cause mayhem in the area and the outcome is what you have seen. The Congress chairman is a fraud and he is working on the script written by the governor.

“How on earth will the national headquarters direct them to come to the State to conduct congress and the governor only is preparing the lists of candidates and imposing them on the party. We will not accept that from them, the petitions we wrote have been submitted at the national headquarters. I want to implore the national leaders not to fold their arms on the issues of Ogun State as Amosun is out to destroy everything,” he said.

Speaking with our correspondent, deputy governor, Prince Segun Adesegun and the Senator representing Ogun East Senatorial District, Senator Adegbenga Kaka maintained that the crisis in the party will be resolved soon.

Chief Segun Osoba: his loyalists have
instituted a suit at a Federal High Court asking the court to declare the party’s Ward congresses illegal

But the Senator frowned at what he described as illegality been perpetrated by the State Congress Committee led by Hon.Ope Salami.

“The Congress Committee is building something on nothing and I don’t think that will work. Last week’s wards Congress across the State was illegal because it did not follow the party guidelines. We have written to the Committee and several people have done so, meaning that, protest marred it all and up till this moment, nothing has been done on it and now the local government congress is going on.

“We have done our congress and the executive members have emerged.I don’t know anything about parallel congress. My humble advice is that the national body should not pretend as if there is nothing. They should call governor Ibikunle Amosun to order before he destroy the party”, Kaka said.

Senator Gbenga Obadara representing Ogun Central while addressing journalists disclosed that his group, Osoba faction, has concluded its congress within the stipulated time frame given by the party.

At Itoro in Ijebu Ode local government, party members were seen with various placards protesting what they called an imposition of Ladi Lekuti by the governor. Lekuti is a former member of the Peoples Democratic Party. The protesters claimed Osoba was their choice as the party chairman in the town.

In Isara-Remo, headquarters of Remo North local government, both the Council Chairman, Otunba Abayomi Soyemi and the State Commissioner for Health, Dr. Olaokun Soyinka declared that their was no problem in the area as they have agreed on what they called,’adoptive method’.

Meanwhile, the faction loyal to Osoba, have instituted a suit at a Federal High Court in Abuja, asking the court to declare the party’s Ward congresses held last week as illegal, null and void.

The case is before Justice Kafarati and will heard on Monday.