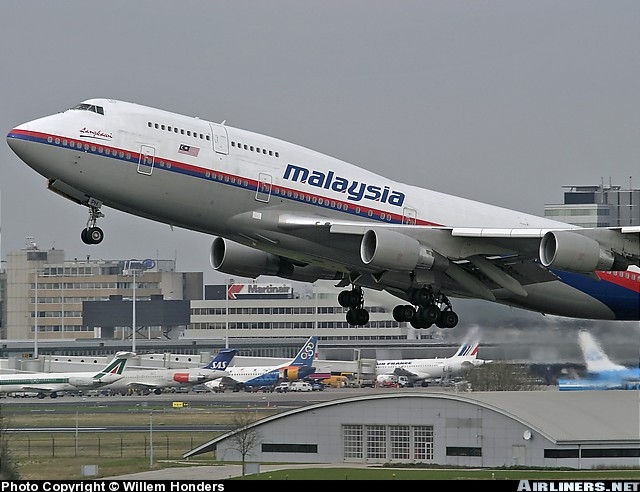 A relative of a missing passenger briefed by the airline in Beijing said, "They have told us all lives are lost."

While the announcement appeared to end hopes of finding survivors more than two weeks after the flight vanished, it left many key questions unanswered, including what went wrong aboard the Beijing-bound airliner and the location of its wreckage in the deep, wild waters of the Indian Ocean.

For families, some of whom had held out hope their relatives somehow were still alive, the news appeared to be devastating. At a briefing for relatives in Beijing, some were overcome and had to be taken from a hotel on stretchers. In Kuala Lumpur, a woman walked out of a briefing for families in tears.

Families told all lives are lost

Are found objects part of MH370?

"My son, my daughter-in-law and granddaughter were all on board. All three family members are gone. I am desperate!" a woman said outside the Beijing briefing.

Another woman came out of the briefing room screaming, expressing doubts about the Malaysian conclusion.

"Where is the proof?" she said. "You haven't confirmed the suspected objects to tell us no one survived."

Sarah Bajc, the partner of one of three Americans aboard the flight, Philip Wood, canceled all media interviews after the announcement.

"I need closure to be certain, but cannot keep on with public efforts against all odds," she wrote. "I still feel his presence, so perhaps it was his soul all along."

While investigators have yet to find even a piece of the plane, the Prime Minister based his announcement on what he described as unprecedented analysis of satellite data by British satellite provider Inmarsat and the British Air Accidents Investigation Branch. He didn't describe the nature of the analysis.

But he said the data — drawn from satellite pings the ill-fated airliner continued to send throughout its final flight — made it clear that the plane's last position was in the middle of the remote southern Indian Ocean, "far from any possible landing sites."

He begged reporters to respect the privacy of relatives.

"For them, the past few weeks have been heartbreaking," he said. "I know this news must be harder still."

The Prime Minister's statement came after the airline sent a text message to relatives saying it "deeply regrets that we have to assume beyond any reasonable doubt that MH370 has been lost and that none of those onboard survived."

The airline said it was making plans to fly families to Australia once wreckage is found.

The announcement came the same day as Australian officials said they had spotted two objects in the southern Indian Ocean that could be related to the flight, which has been missing since March 8 with 239 people aboard.

One object is "a grey or green circular object," and the other is "an orange rectangular object," the Australian Maritime Safety Authority said.

The objects are the latest in a series of sightings, including "suspicious objects" reported earlier Monday by a Chinese military plane that was searching in the same region, authorities said.

A U.S. surveillance plane sent to follow up was unable to find the objects, and so far, none of the sightings has been definitively linked to Flight 370.

China said Monday after the Prime Minister's announcement that it would be sending more ships to help search for the aircraft.

China has a particularly large stake in the search: Its citizens made up about two-thirds of the passengers on the missing Boeing 777.

Beijing, which has repeatedly called on Malaysian authorities to step up efforts to find the plane, repeated those calls Monday after the Prime Minister's announcement.

China is paying "high attention" to the Malaysian announcement that the plane had gone down in the ocean, and asked authorities there for "all information and evidence leading up to such a conclusion," according to a statement posted on the Chinese Foreign Ministry's website.

Amid a vast regional search that at one point spanned nearly 3 million square miles, searchers have homed in on the southern Indian Ocean in recent days after satellite images that have spotted a variety of unknown objects in an area roughly 1,500 miles southwest of Perth, Australia.

Australia reported the first images in the area, followed by China and France.

The area also lies on a projected flight path for the aircraft calculated in part from the satellite pings sent by the plane after other communications systems had shut down.

Australian officials have repeatedly warned that the objects may not turn out to be from the missing plane. They could be containers that have fallen off cargo ships, for example.

On Saturday, searchers found a wooden pallet as well as strapping belts, Australian authorities said. Hishammuddin said Monday that wooden pallets were among the items on Flight 370. But such pallets are also common in the ocean shipping industry, so it they may be unrelated to the flight.

The investigation into the passenger jet's disappearance has already produced a wealth of false leads and speculative theories. Previously, when the hunt was focused on the South China Sea near where the plane dropped off civilian radar, a number of sightings of debris proved to be unrelated to the search.

How they're searching for debris

Plane said to have flown low

Monday's dramatic developments came after a weekend during which other nuggets of information emerged about the movements of the errant jetliner on the night it vanished.

Military radar tracking shows that after making a sharp turn over the South China Sea, the plane changed altitude as it headed toward the Strait of Malacca, an official close to the investigation into the missing flight told CNN.

The plane flew as low as 12,000 feet at some point before it disappeared from radar, according to the official. It had reportedly been flying at a cruising altitude of 35,000 feet when contact was lost with air traffic control.

The sharp turn seemed to be intentional, the official said, because executing it would have taken the Boeing 777 two minutes — a time period during which the pilot or co-pilot could have sent an emergency signal if there had been a fire or other emergency on board.

Authorities say the plane didn't send any emergency signals, though some analysts say it's still unclear whether the pilots tried but weren't able to communicate because of a catastrophic failure of the aircraft's systems.

The official, who is not authorized to speak to the media, told CNN that the area the plane flew in after the turn is a heavily trafficked air corridor and that flying at 12,000 feet would have kept the jet well out of the way of that traffic.

What could wreckage tell us about the flight's fate?

Also over the weekend, Malaysian authorities said the last transmission from the missing aircraft's reporting system showed it heading to Beijing — a revelation that appears to undercut the theory that someone reprogrammed the plane's flight path before the co-pilot signed off with air traffic controllers for the last time.

That reduces, but doesn't rule out, suspicions about foul play in the cockpit.

Last week, CNN and other news organizations, citing unnamed sources, reported that authorities believed someone had reprogrammed the aircraft's flight computer before the sign-off.

CNN cited sources who believed the plane's flight computer must have been reprogrammed because it flew directly over navigational way points. A plane controlled by a human probably would not have been so precise, the sources said.

Malaysian authorities never confirmed that account, saying last week that the plane's "documented flight path" had not been altered.

On Sunday, they clarified that statement further, saying the plane's automated data reporting system included no route changes in its last burst, sent at 1:07 a.m. — 12 minutes before the last voice communication with flight controllers.

Analysts are divided about what the latest information could mean. Some argue it's a sign that mechanical failure sent the plane suddenly off course. Others say there are still too many unknowns to eliminate any possibilities.

"Now we have no evidence the crew did anything wrong," he said. "And in fact, now, we should be operating with the primary assumption being that something bad happened to that plane shortly after they said good night."

If a crisis on board caused the plane to lose pressure, he said, pilots could have chosen to deliberately fly lower to save passengers.

"You want to get down to 10,000 feet, because that is when you don't have to worry about pressurization. You have enough air in the atmosphere naturally to keep everybody alive," he said. "So part of the procedure for a rapid decompression … it's called a high dive, and you go as quickly as you can down that to that altitude."

Authorities have said pilot Zaharie Ahmad Shah was highly experienced. On Monday, Malaysian authorities said Flight 370 was co-pilot Fariq Abdul Hamid's sixth flight in a Boeing 777, and the first time when he was not traveling with an instructor pilot shadowing him.

"We do not see any problem with him," said Malaysia Airlines CEO Ahmad Jauhari Yahya.

These are depressing times – stemming from different factors of END_OF_DOCUMENT_TOKEN_TO_BE_REPLACED

It is a glaring fact that Northerners occupy over 80 END_OF_DOCUMENT_TOKEN_TO_BE_REPLACED

Presidential Special Scholarship : “In 2014, I and several other END_OF_DOCUMENT_TOKEN_TO_BE_REPLACED