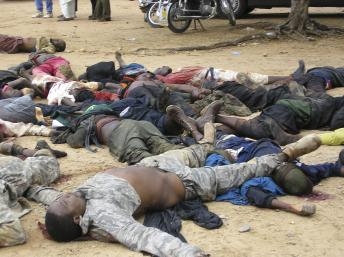 A group of Nigerian students protested outside the Mountainlair on Sunday against the Boko Haram insurgency in Northern Nigeria.

Boko Haram, an Islamic extremist terrorist organization in northeast Nigeria with ties to al-Qaeda, is responsible for a series of terrorist attacks dating back to 2009.

Boko Haram means “Western education is sinful,” and it strives to build a Nigeria ruled by Sharia law that distances itself from Western customs and beliefs.

The group has been increasing its activity, and Nigerian students at West Virginia University hosted the rally to show they do not accept or are affiliated with the actions of the group.

“We’re not a terrorist state. We’re just a group of hard-working people,” said Oladokun Fadoju, one of the students who initiated the rally told The Daily Anthenaeum in West Virginia, USA. “They are trying to portray the country (in a bad way) and give it a negative image that it doesn’t have.

“So what we’re trying to do here is send a message to the international community that our country is not a bad country. Our country is a peaceful and loving country.”

Boko Haram claimed responsibility for the bombing of the U.N. headquarters in Nigeria in 2011 that killed 21 people, and in recent months, they have burned down thousands of buildings throughout Nigeria.

In February, the group slit the throats of 41 schoolboys in the Nigerian state of Yobe.

The organization has grown and expanded its operations to neighbouring countries Cameroon and Niger, and the U.S. State Department has now raised warning flags about the group and worry its rapid expansion will increase an already dangerous situation in the area.

“It’s more political than it seems, but when it becomes societal, it becomes a big problem,” Fadoju said. “It’s a struggle for political power.”

Many students from other African countries showed up to the rally to show their support.

Some of the students said Western countries often tend to group all Africans under one label, and they are concerned the same will happen with the Boko Haram terrorists.

“Bigger countries like Nigeria summarize a lot of what happens in Africa,” said Faith Chaibva, a student from Zimbabwe.

“Smaller countries like mine do matter but more credit is given to these bigger countries, and they really portray an important picture when it comes to the reputation of Africa. This has to stop because we love Nigeria. It’s a wonderful country, and this is not fair.”