Military Frowns at Maku For Warning them Against Coup 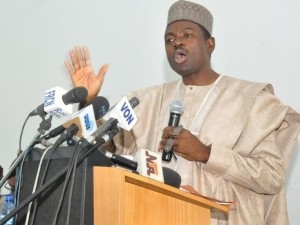 The minister of information, Labaran Maku, is in trouble for advising the military against intervening in the ongoing political logjam as top military officers have frowned against such ‘ill-advice’.

Speaking while handing over to the new defence minister, Gen Aliyu Mohammed Gusau, Maku who had been the supervising minister for the ministry advised the military against interrupting the democratic process.

He had said: “We are heading towards an electoral phase in Nigeria this year, and there have been a lot of utterances from within and outside the country relating to the unity and future of Nigeria. But I’m aware that Mr. President has variously assured the world that this election would be freer than what we saw in 2011.

“And for all of us who are politicians, we know our responsibility to the country. One great thing the Armed Forces must continue to do is to remain very loyal to the constitution and to our democracy.

“The past experiences have not helped the country. We all know that, maybe, without those military interruptions, Nigeria would today be at par with India, Malaysia and others. So interruptions have not helped the country. And we pray that after 14 years of democratic rule, the Army, the Armed Forces would continue to remain loyal to the constitution, the commander-in-chief, and to our democratic system.”

But if the feelers coming from the military are anything to go by, the minister may have advised a wrong audience as not fewer than seven top military officers kicked against his speech.

“The minister was talking rubbish, thank God for democracy, who is he to be talking, addressing our service chiefs that way? When last did he hear any coup plot in this country? Is he having any security reports that alleged any coup plot? If yes, we challenge him to bring it out otherwise, he should keep silent,” a top military officer said.

Speaking in the same vein, another top officer said: “Maku should learn how to say what and where. As the Information Minister, he should not be adding more problems to the ones on ground. Since 1999, the Armed Forces had parted ways with politics; we are facing our professional jobs and if anyone is advising us against any interruption of the government now, such an individual is advised to stop talking balderdash.”

A highly respected security chief has a word of advice for the political class. He urged them to be cautious in speaking about the military.

“I think it is high time our politicians stopped talking any how of the Armed Forces of Nigeria, our patriotism and commitment with dedication to duty are total. We are more interested in the survival of the country more than all those who are being talking down on us. The other day a governor was saying the terrorists are better armed than us and the Information minister was lecturing us on loyalty. This is uncalled for. They should learn to how to address us after all Nigeria belongs to all of us.”

Another General asked the Makus to learn from General Gusau about how to speak in the pubic.

“Politicians like Maku and those saying we are doing nothing about Boko Haram insurgent should learn how to talk about the military from General Gusau. With all the rubbish Maku said, the respected General not only commended the military but went on to affirm the security challenges but said they are not insurmountable. Whatever anybody has against the military there is a better way of saying it and not to the whole world through the media. May be these people are just looking for front page treatment in the newspapers I don’t know.”

Spread the loveOf all the updates that have been given END_OF_DOCUMENT_TOKEN_TO_BE_REPLACED