Reuters has reported that the missing Malaysian airliner with 239 people on board suspect may have disintegrated mid-flight, quoting close sources to the investigation.

This theory comes on the tail of another report that Vietnam searchers may have spotted some wreckage from the plane.

An Interpol spokeswoman said a check of all documents used to board the plane had revealed more “suspect passports” that were being further investigated. She was unable to say how many, or from which country or countries.

A Malaysian airline Boeing 777-200: a similar one missing on South China sea

“I am still perturbed. Can’t these immigration officials think? Italian and Austrian (passport holders) but with Asian faces,” he was quoted as saying late on Sunday.

Nearly 48 hours after the last contact with Flight MH370, mystery surrounded its fate. Malaysia’s air force chief said the Beijing-bound airliner may have turned back from its scheduled route before it vanished from radar screens.

“The fact that we are unable to find any debris so far appears to indicate that the aircraft is likely to have disintegrated at around 35,000 feet,” a source involved in the investigations in Malaysia told Reuters.

If the plane had plunged intact from close to its cruising altitude, breaking up only on impact with the water, search teams would have expected to find a fairly concentrated pattern of debris, said the source, speaking on condition of anonymity because he was not authorized to discuss the investigation publicly.

Asked about the possibility of an explosion, such as a bomb, the source said there was no evidence yet of foul play and that the aircraft could have broken up due to mechanical causes.

Two large oil slicks spotted by the Vietnamese air force offered the first sign that a jetliner carrying 239 people had crashed into the ocean after vanishing from radar without sending a single distress call.

An international fleet of planes and ships scouted the waters between Malaysia and Vietnam for any clues to the fate of the Malaysian Airlines Boeing 777, which disappeared Saturday less than an hour after taking off from Kuala Lumpur bound for Beijing.

The oil slicks sighted Saturday off the southern tip of Vietnam were each between 10 kilometers (6 miles) and 15 kilometers (9 miles) long, the Vietnamese government said in a statement.

There was no immediate confirmation that the slicks were related to Flight MH370, but the government said they were consistent with the kind of slick that would be produced by the jet's two fuel tanks.

He said that the air search, suspended for the night, resumed Sunday, in addition to a sea search that continued through the darkness. 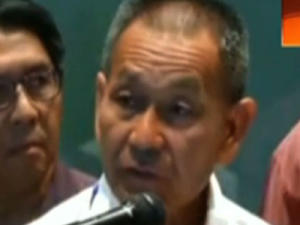 The jet's disappearance was especially mysterious because it apparently happened when the plane was at cruising altitude, not during the more dangerous phases of takeoff or landing.

Just 9 percent of fatal accidents happen when a plane is at cruising altitude, according to a statistical summary of commercial jet accidents done by Boeing.

Malaysia Airlines CEO Ahmad Jauhari Yahya said there was no indication the pilots had sent a distress signal. That might mean that whatever trouble befell the plane happened so fast the crew did not have time to broadcast even a quick mayday.

The plane was last inspected 10 days ago and found to be "in proper condition," Ignatius Ong, CEO of Malaysia Airlines subsidiary Firefly airlines, said at a news conference. 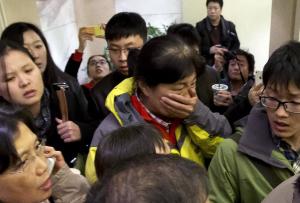 A woman, center, surrounded by media covers her mouth on her arrival at a hotel which is prepared fo …

Two-thirds of the jet's passengers were from China. The rest were from elsewhere in Asia, North America and Europe.

Asked whether terrorism was suspected, Malaysian Prime Minister Najib Razak said authorities were "looking at all possibilities, but it is too early to make any conclusive remarks."

Contributing to fears of foul play was word from foreign ministries in Italy and Austria that the names of two citizens listed on the flight's manifest matched the names on two passports reported stolen in Thailand.

Italy's Foreign Ministry said an Italian man who was listed as a passenger, Luigi Maraldi, was traveling in Thailand and was not aboard the plane. It said he reported his passport stolen last August.

Austria's Foreign Ministry confirmed that a name listed on the manifest matched an Austrian passport reported stolen two years ago. It said the Austrian was not on the plane but would not identify the person. 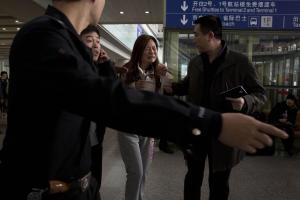 A woman cries at the arrival hall of the International Airport in Beijing, China, Saturday, March 8, …

The amount of time needed to find aircraft that go down over the ocean can vary widely. Planes that crash into relatively shallow areas, like the waters off Vietnam where the Malaysian jet is missing, are far easier to locate and recover than those that plunge deep into undersea canyons or mountain ranges.

At Beijing's airport, authorities posted a notice asking relatives and friends of passengers to gather at a nearby hotel to await further information. A woman aboard a shuttle bus wept, saying on a mobile phone, "They want us to go to the hotel. It cannot be good."

Nan Jinyan, a relative of a Beijing hospital staffer who was among the passengers, said all the information they were getting was from the Internet and the news.

Passengers' loved ones were escorted into a private area at the hotel, but reporters were kept away. A man in a gray hooded sweatshirt later stormed out complaining about a lack of information. The man, who said he was a Beijing resident but declined to give his name, said he was anxious because his mother was aboard the flight with a tourist group.

"We have been waiting for hours and there is still no verification," he said. 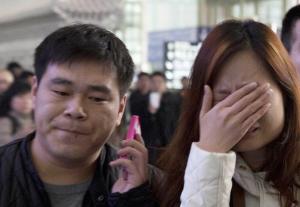 ALTERNATE CROP OF XHG102 A woman cries at the arrival hall of the International Airport in Beijing,  …

The plane was last seen on radar at 1:30 a.m. (1730 GMT Friday) above the waters where the South China Sea meets the Gulf of Thailand, authorities in Malaysia and Vietnam said.

The South China Sea is a tense region with competing territorial claims that have led to several low-level conflicts, particularly between China and the Philippines. That antipathy briefly faded Saturday as China, the Philippines, Vietnam, Singapore and Malaysia all sent ships and planes to the region.

Malaysia had dispatched 15 planes and nine ships to the area, Najib said.

The U.S. Navy was sending a warship and a surveillance plane, while Singapore said it would send a submarine and a plane. China and Vietnam also sent aircraft to help in the search. 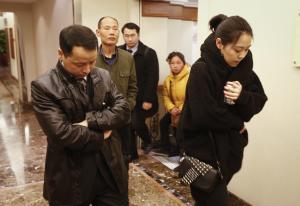 The plane was carrying 227 passengers and 12 crew members, the airline said. The manifest included 152 passengers from China, 38 from Malaysia, seven from Indonesia, six from Australia, five from India, three from the U.S., and others from Indonesia, France, New Zealand, Canada, Ukraine, Russia, Taiwan and the Netherlands.

In the United States, a friend confirmed that an IBM executive from North Texas named Philip Wood had been aboard the jet. And an Austin, Texas, technology company known as Freescale Semiconductor confirmed that it had 20 employees from Malaysia and China on the flight.

Malaysia Airlines has a good safety record, as does the 777, which had not had a fatal crash in its 19-year history until an Asiana Airlines plane crashed last July in San Francisco, killing three passengers, all teenagers from China.

If wreckage is found, a top priority will be recovering the airliner's "black boxes," the flight-data and cockpit-voice recorders that are equipped with "pingers" that emit ultrasonic signals that can be detected underwater. Under good conditions, the signals can be detected from several hundred miles away, said John Goglia, a former member of the U.S. National Transportation Safety Board.

If the boxes are trapped inside the wreckage, the sound may not travel as far. If the boxes are at the bottom of an underwater trench, that also hinders how far the sound can travel. Signals can weaken over time. 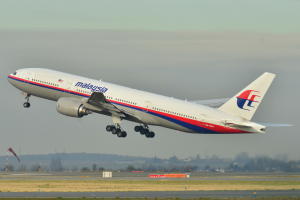 When Air France Flight 447, flying from Rio de Janeiro to Paris in 2009, went down in the Atlantic with 228 people on board, the Airbus 330 fell into especially deep water. It took nearly two years to recover the main wreckage and the black boxes from a depth of around 13,000 feet.

By contrast, much of the Gulf of Thailand is less than 300 feet deep.