TO SADIQ ABACHA — ON BEHALF OF WOLE SOYINKA | BY AYO SOGUNRO 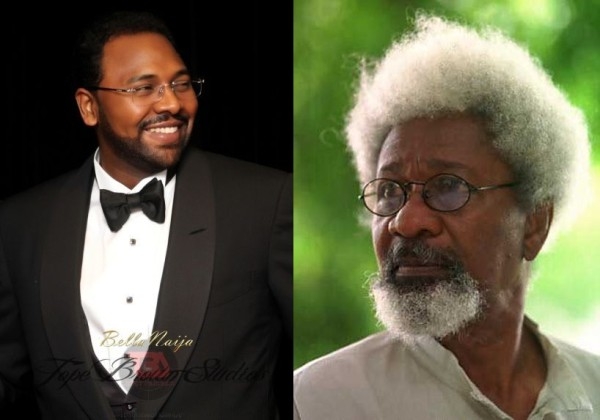 I do not know you personally, but I admire your filial bravery—however misguided—in defending the honour of your father, the late General Sani Abacha. This in itself is not a problem; it is an obligation—in this cultural construct of ours—for children to rise to the defence of their parents, no matter what infamy or perfidy the said parent might have dabbled in.

The problem I have with your letter, however, arises from two issues: (i) your disparaging of Wole Soyinka, who—despite your referral to an anecdotal opinion that calls him as “a common writer”—is a great father figure, and a source of inspiration, to a fair number of us young Nigerians; and (ii) your attempt to revise Nigerian history and substitute our national experience with your personal opinions.

Therefore, it is necessary that we who are either Wole Soyinka’s “socio-political” children, or who are ordinary Nigerians who experienced life under your father’s reign speak out urgently against your amnesiac article, lest some future historian stumble across the misguided missive, and confuse the self-aggrandized opinions of your family for the perceptions of Nigerians in general.

Your letter started with logical principles, which is a splendid common ground for us. So let us go with the facts: General Sani Abacha was a dictator. He came into power and wielded it for 5 years in a manner hitherto unprecedented in Nigerian history. Facts: uncomfortable for your family, but true all the same.

Now, for my personal interpretations: between 1993 and 1998 inclusive, when your dada was in power, I was a boy of 9 to 14 years and quite capable of making observations about my political and cultural environment. Those years have been the worst years of my material life as a Nigerian citizen. Here are a few recollections: I recollect waking up several mornings to scrape sawdust from carpentry mills, lugging the bags a long distance home, just to fuel our “Abacha stoves” because kerosene was not affordable—under your father. I recollect cowering under the cover of darkness, with family and neighbours, listening to radio stations—banned by your father. I recollect my government teacher apologetically and fearfully explaining constitutional government to us—because free speech was a crime under your father’s government. Most of all, I remember how the news of your father’s death drove me—and my colleagues at school—to a wild excitement, and we burst into the street in delirious celebration. Nobody prompted us, but even as 13 and 14 year olds, we understood the link between the death of Abacha and the hope of freedom for the ordinary man.

These are all sorry tales, of course. Such interpretations would not have occured to the wealthy and the privileged under your father’s government, but they were a part of the everyday life of a common teenager under that government. The economics were bad, but the politics were worse. And I am not referring to Alfred Rewane, Kudirat Abiola and the scores killed by the order of your father. Political killings are almost a part of every political system, and most of those were just newspaper stories to us. In fact, I didn’t get to read most of the atrocities until long after your father died. So, these stories did not inform the dread I personally felt under your father’s regime. And this was true for my entire family and our neighbours.

Instead, the worry over our own existence was a more pressing issue. Your father, Sani Abacha was in Aso Rock, but his brutality was felt right in our sitting room. We were not into politics and we didn’t vocally oppose Abacha, yet we just knew we were not safe from him. You see, unlike any dictatorship before or after it—your father’s government personally and directly threatened the life and freedoms of the average Nigerian. Your father threatened me. And if your father had not died, I am confident that I would not be alive or free today.

Think of that for a while.

Now, let’s come to Wole Soyinka. First: you can never eradicate the infamy of your father’s legacy by trying to point out the failings of another Nigerian. Remember what you said: A is A.  Abacha is Abacha. And no length of finger pointing will wash away the odious feeling the name of Abacha strikes up in the mind of the average Nigerian. Second: Don’t—as they musician said—get it twisted: Wole Soyinka did not antagonize your father just because he was a military man—Wole Soyinka was against your father’s inhumanity. Your father was intolerant of criticism beyond belief. Your father made military men look bad. Your father’s behaviour was so bad it went back in time and soiled the reputation of every military man before him. Your father, finally, made Nigerians swear never—ever—to tolerate the military again. Soyinka may have worked with the military before—but your father ensured that he will never work with the military again. Do you see? Three: Evil comes in many forms: there is no qualification by degree. There is no “good” evil thing. Sani Abacha, Boko Haram, Hitler, slavery—they all fit into the same category of misfortunes. Soyinka is right: Abacha was just as bad as Boko Haram is—deal with it. Four: Soyinka has been kind enough to limit his criticism to the unenviable awards this inept government has given your father. But, you see, in a saner political system, we wouldn’t just ignore your father, we would have gone one step further and expunged the Abacha name from all public records. Wiped without a trace. Abacha would forever be a cautionary tale against the excesses of political power. In a saner political system.

Abacha was brutal—and Soyinka was one of those individuals who gave us inspiration in those dark days. He was part of the team that founded the underground radio station to counter your father’s activities. Let me rephrase in pop culture language: Wole Soyinka was the James Bond to your father’s KGB. Most of the influential people either kept quiet or sang the praises of your father to stave his wrath. But a few like Soyinka spoke, wrote and even went militant against Abacha. But at the end, even Soyinka who never ran from a fight had to run from your father. That was how terrible things were. And now you want Soyinka to join the praise singers of your father? I’m not certain Soyinka has grown old enough to forget how he escaped your father,slipping across the border in disguise. You will have to wait awhile to get that praise from him.

Now, back to you. You have a deluded sense of your father’s role in the progress of Nigeria’s history. Nigeria has managed to be where it is today, not because of leaders like your father—but in spite of leaders like your father. This is a testament to the Nigerian spirit of resilience, and our unwavering optimism in a better future. You owe every Nigerian an apology for daring to attribute this to the leadership of Abacha. Those “achievements” you believe were accomplished under your father were simply all the things he had to do to keep milking the economy, and thereby perpetuate himself in power—they benefited Nigeria only if, by Nigeria, you meant your family and your cronies.

Your tone is that of a white master who justifies his oppression because he clothed and fed his black slaves. That is what your father did. The fact that we choose not to regurgitate, and reflect on that socially traumatic period doesn’t mean we accept it as your entitlement. We have not forgotten, and we will never forget. Sani Abacha raped Nigeria. Your father raped us. Your father raped us and then pressed some change into our hands. And he then tried to marry us forcefully, too. You may think all this is well and good—but then you’ve never been raped before.

And we would probably have cheered.

But we live under a democracy now—a system of government where even the scions of former oppressors can talk, and write freely, about the benefits of dictatorship. That’s a democracy. A concept your father wouldn’t have understood.

Ayo Sogunro is the author of The Wonderful Life of Senator Boniface and other Sorry Tales. A lawyer by profession, he also indulges in socio-legal philosophy on this blog.

(Genesis 50:14 (NIV) …14 For God shall bring every work into END_OF_DOCUMENT_TOKEN_TO_BE_REPLACED

It is a glaring fact that Northerners occupy over 80 END_OF_DOCUMENT_TOKEN_TO_BE_REPLACED

Presidential Special Scholarship : “In 2014, I and several other END_OF_DOCUMENT_TOKEN_TO_BE_REPLACED