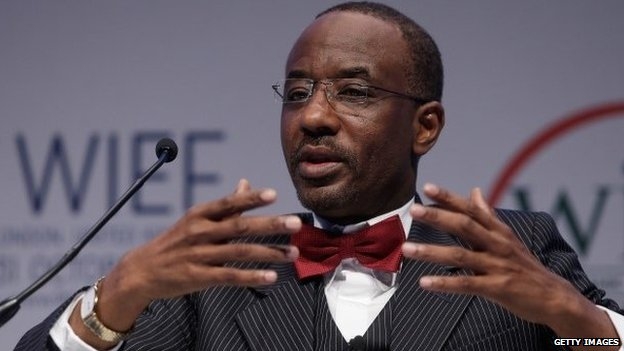 Nigeria's central bank governor Lamido Sanusi has been suspended by the president for "financial recklessness and misconduct".

Mr Sanusi caused shockwaves in Nigeria when he alleged that $20bn (£12bn) in oil revenue had gone missing.

Nigeria's state oil firm has denied failing to account for the money, saying the claim was "unsubstantiated".

Mr Sanusi is widely respected after undertaking reforms to the banking sector since his appointment in 2009.

He was named central bank governor of the year for 2010 by Banker magazine.

To say that Lamido Sanusi has become a fly in the ointment for President Goodluck Jonathan would be something of an understatement.

His allegations threaten to expose high-level fraud in Nigeria's notoriously opaque and corrupt oil sector. He says over a 19-month period, more than $1bn was unaccounted for every month.

The controversy comes at a time when elections loom and some of the president's senior officials are being asked some very awkward questions.

Mr Sanusi's critics wonder about his own political ambitions and question whether he is using his job to harm President Jonathan's chances in 2015. But to many Nigerians it will appear that the president has chosen to suspend the whistleblower rather than focus on stopping fraud.

Efforts to tackle corruption rarely get anywhere in Nigeria. In 2007 Nuhu Ribadu was suspended as the head of the Economic and Financial Crimes Commission. As Nigeria's pidgin speakers would say: "To fight corruption. No be easy job o."

He told the BBC he would challenge his suspension in order to preserve the central bank's independence.

Foreign exchange, bond and money markets have stopped trading because of uncertainty caused by the move, Reuters news agency reports.

The BBC's Will Ross in Lagos says Mr Sanusi's allegations threaten to expose high-level fraud in Nigeria's notoriously opaque and corrupt oil sector. Nigeria is one of the world's biggest oil producers.

The controversy also comes ahead of next year's elections, with the governing party split over whether President Goodluck Jonathan should contest.

Earlier this month, Mr Sanusi told a senate committee that out of $67bn of oil sold between January 2012 and July 2013, $20bn had not been accounted for.

The Nigerian National Petroleum Corporation said the allegations showed "little understanding of the technicalities of the oil industry".

Mr Sanusi is currently in Niger attending a meeting of top officials, which he has now left.

His deputy, Sarah Alade, who is travelling with him, will fill in until a new governor is appointed.

The president does not have the power to sack the central bank governor – only the National Assembly can do this.

His term in office was due to end in June but correspondents say the decision to suspend him now is still highly significant.

The presidential statement announcing his suspension said he had been removed pending "investigations into breaches of enabling laws, due process and mandate" of the Central Bank of Nigeria.

It said his "tenure has been characterised by various acts of financial recklessness and misconduct… [and] far-reaching irregularities".

While Mr Sanusi's critics question whether he is using his job to harm President Jonathan's chances of re-election, many Nigerians will think the president has chosen to suspend the whistleblower rather than focus on stopping fraud, our correspondent says.

Spread the loveOf all the updates that have been given END_OF_DOCUMENT_TOKEN_TO_BE_REPLACED