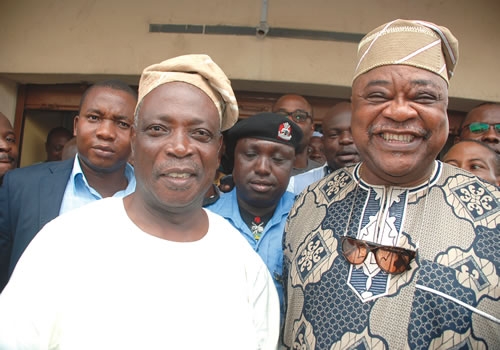 Top echelon of the Peoples Democratic Party (PDP) has launched a fresh strategy to ensure the party regains control of the South-West region in the next general election.

The first prong of the strategy, Nigerian Tribune gathered, is focused on winning Oyo State, which is the political capital of the region, back to mainstream politics.

It was learnt that the PDP Board of Trustees (BoT) Chairman, Chief Tony Anenih, held a meeting with bigwigs in the politics of Oyo State, including former governors Rashidi Ladoja and Adebayo Alao-Akala, in Abuja, recently.

Ladoja, a foundation member of the umbrella party, it will be recalled, left the PDP in 2010 following irreconcilable differences among chieftains of the party.

He brought Accord Party to the state under which he contested the governorship election in 2011, with the party recording impressive showing at the elections.

Nigerian Tribune reliably scooped that Anenih expressed confidence in the ability of PDP regaining Oyo State if Ladoja returns to help build the party which is now heavily factionalised.

To demonstrate the seriousness with which the top hierarchy of the PDP cherishes Ladoja’s return, the octogenarian BoT chairman promised that the state governorship ticket of the party will be given automatically to Ladoja.

It was gathered that his former deputy, Alao-Akala, was assured of Oyo North Senatorial ticket, so that the combined force of the two gladiators will translate to easy victory for PDP in 2015.

The fresh move for Ladoja by the PDP was said to have followed intelligence gathering by the PDP hierarchy that Ladoja still enjoys tremendous state-wide following.

Nigerian Tribune gathered that Anenih’s intervention followed a secret move by the opposition All Progressives Congress (APC) to have Ladoja in its fold.

The APC, it was gathered, had asked former President Olusegun Obasanjo to help it convince Ladoja to defect to the opposition party.

Previous Post Sarakis battle for the soul of Kwara as Gbemisola, APC, CPC leaders decamp to PDP
Next Post NASA is now accepting applications from companies that want to mine the moon