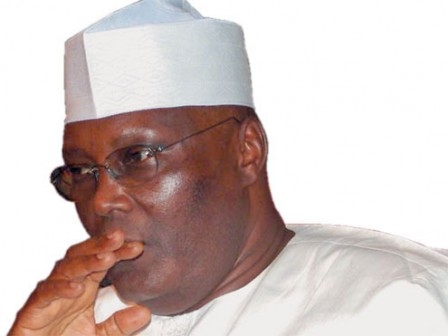 Four days after he announced his defection to the All Progressives Congress, APC, a former Vice President, Atiku Abubakar, on Wednesday registered his membership officially with the party.

He registered in his native Jada Village in Adamawa State.

Mr. Abubakar was until last Sunday a member of the Peoples Democratic Party, PDP. He was vice president on the platform of the party between 1999 and 2007.

He, however, left the party following his stand-off with his former boss, ex-President Olusegun Obasanjo. He contested the 2007 presidential election in his new party, the defunct Action Congress, but lost.

Mr. Abubakar returned to the PDP in 2009 and was granted waiver by the party in September of the following year. He therefore contested the party’s presidential primaries, but lost to President Goodluck Jonathan, who eventually flew its flag in the 2011 election.

The Chairman of the APC in Adamawa State and that of Ganye Zone of the state conducted the membership registration where the former vice president was registered.

Mr. Abubakar, who was cheered by supporters who chanted APC in solidarity with him, had arrived at the registration centre at 2.12 p.m. and was handed a form by the zonal chairman, which he filled out along with an attached passport photograph.

At the end of the exercise, the state interim chairman handed Mr. Abubakar a detached slip from the form with No. 02000841, which would serve as a temporary membership card until a permanent and laminated one was issued to him.

Speaking with journalists, Mr. Abubakar, who holds the traditional title of Turaki Adamawa, charged his supporters nationwide to avail themselves of the opportunity by registering as members of the APC, so that together they could bring about the desired change.

“To make good on the change that you are earnestly yearning for, I urge all my supporters no matter where you may be to follow in my footsteps and register as a member of APC,” he said.

Mr. Abubakar had earlier paid a courtesy call on Emir of Ganye, Umar Sanda, who prayed and wished him well in his enterprise.

Spread the love(Genesis 50:14 (NIV) …14 For God shall bring every END_OF_DOCUMENT_TOKEN_TO_BE_REPLACED