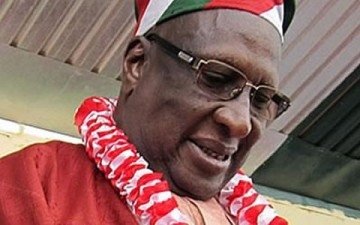 President Goodluck Jonathan has appointed the immediate past National Chairman of the Peoples Democratic Party, PDP, Bamanga Tukur, as Chairman of the Board of the Nigerian Railway Corporation.

Mr. Tukur last week resigned his position as National Chairman of the PDP. He has since been replaced with ex-Bauchi governor, Adamu Muazu.

Mr. Tukur’s appointment as Railway Corporation, NRC, chairman was announced in a statement by the Special Assistant (Media) to the Secretary to the Government of the Federation, Sam Nwaobasi.

The position of NRC chairman was formerly held by Kawu Baraje, the former factional chairman of the PDP who has since led his faction to fuse into the All Progressives Congress. Mr. Baraje resigned in the height of the PDP crisis in late 2013.

Mr. Jonathan, according to the statement, has also approved the appointment of Ghaji Ismaila Bello as Director-General of the National Population Commission with effect from January 8, 2014.

According to its enabling law, the Nigeria Railway Corporation is charged with facilitating effective “carriage of passengers and goods in a manner that will offer full value for money; meet cost of operation; improve market share and quality of services; ensure safety of operations and maximum efficiency; meet social responsibility in a manner that will meet the requirements of rail users, trade, commerce, industry and general public”.

President Jonathan had after announcing Mr. Tukur’s resignation as PDP chairman at the National Executive Committee meeting of the party, on January 16, hinted that he would reward the former party chief with another appointment.

“He (Mr. Tukur) is not guilty of any offence and I am going to give him an assignment that is tougher than PDP chairman,” the president said at that event.

President Jonathan is currently away in Davos, Switzerland for the World Economic Forum.

Spread the loveBy now, most people have read the story END_OF_DOCUMENT_TOKEN_TO_BE_REPLACED