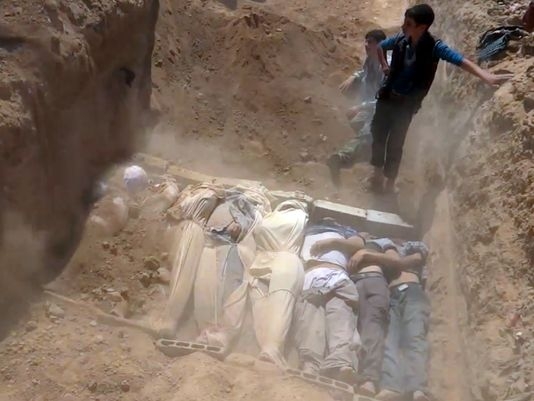 France and the Arab League said Syria must be held responsible for the attack.

"France is ready to punish those who took the decision to gas the innocent," French President Francois Hollande told a meeting in Paris of French ambassadors.

The Arab League issued a statement Tuesday saying it holds Syrian President Bashar Assad responsible for the chemical attack and that the United Nations should respond. The statement following a meeting of Arab League envoys in Cairo had strong support from Saudi Arabia and Qatar, Reuters said.

But Syria's state-run Syrian Arab News Agency accused Secretary of State John Kerry of using "fabricated" evidence to claim that it is "undeniable" that Syria used chemical weapons against civilians on Aug. 21.

Syria Foreign Minister Walid al-Moallem said Tuesday his country would defend itself using "all means available" in case of a U.S. strike.

President Obama's national security team continued to assess military options to follow up on the president's pledge a year ago to take "game-changing" action if Syria uses chemical weapons in its 2-year-old civil war.

The United Nations said that its team of chemical weapons experts in Syria delayed a second trip Tuesday to investigate the alleged poison gas attack near Damascus by one day for security reasons.

A Russian cargo plane delivered 20 tons of food to Syria's port city of Latakia, and will evacuate 180 citizens of former Soviet countries, Russian TV station RT reported. Russia warned that military intervention in Syria would have "catastrophic consequences" for the region, RT reported.

Ken Pollack, a former Middle East adviser to the National Security Council in the Clinton administration, says a military strike could have unforeseen results and bring a response from others, such as Syria backers Iran, Russia and the terrorist group Hezbollah based in Lebanon.

But if the strike is limited, neither the Iranians, Hezbollah or the Syrian regime want a fight with the United States or Israel, he said.

"I think there's a reasonable expectation this can be kept limited in terms of blow-back," he said.

Pollack and other analysts, such as former U.S. ambassador to the U.N. John Bolton, say any military action must be strong enough to deter Syria from using chemical weapons and help rebels end the Assad regime.

It would be dangerous if the U.S. goal is to only contain the Syrian conflict, Pollack said. "That's how you get sucked into something without thinking about it. It's the incremental escalation to simply buy off criticism (that the USA is not engaged) that gets you into a lot of trouble."

Top generals from the United States and European and Middle Eastern allies met in Jordan for what could be a war council, according to Reuters. And British Prime Minister David Cameron has called Parliament back from recess for a session on Syria on Thursday.

Warplanes and military transporters have begun arriving at Britain's Akrotiri airbase on the Mediterranean island of Cyprus, less than 100 miles from the Syrian coast, a sign of possible preparations for a military strike against the Assad regime, according to the Guardian.

How many people died in last week's attack is unknown. Doctors Without Borders, a humanitarian group based in France, said at least 350 people died in a region outside Damascus from what appeared to be poison gas. Rebel groups who have been trying to topple Assad for more than 2 years said more than 1,000 people died in a chemical weapons attack..

An inspection team from the United Nations went to the site Monday to look for evidence of what happened and who is responsible. They convoy was hit by sniper fire on the way, but no one was injured. U.N. spokeswoman Alessandra Vellucci told reporters in Geneva that the team might need longer than the planned 14 days to complete its work.