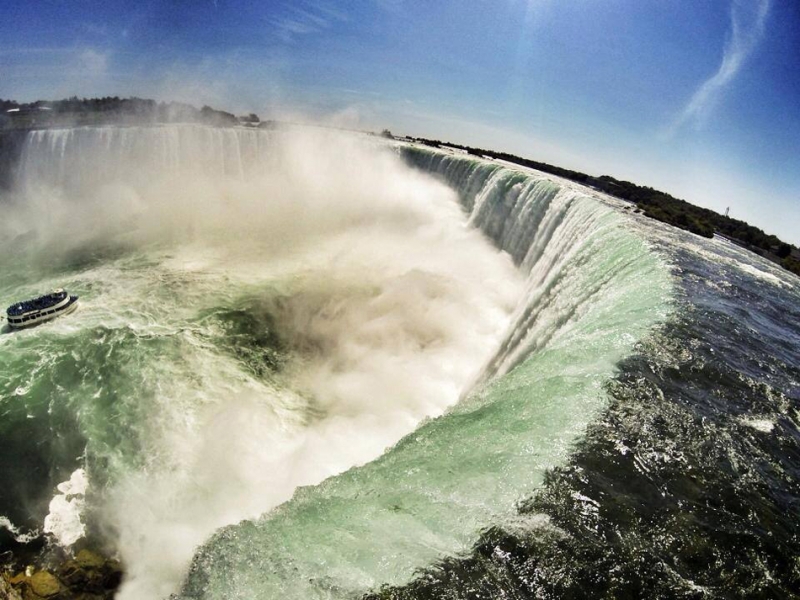 Sunday, after standing at the foot of the 167-foot drop and sizing up a line for the first descent (above photo), Ortiz made a crucial decision, as detailed in Canoe & Kayak.

He walked away, leaving the iconic waterfall in his rear-view mirror with an unfulfilled dream.

Not often it hurts so much to walk away from a dream.

I’ve been dreaming about running Niagara Falls for the past three years of my life. Every single day since I saw that line; I’ve been haunted by it, it’s been both a dream and a nightmare.

Every piece lined up and ready to launch, today [Sunday] I walked to the drop like I’ve done with many waterfalls in the past, looking for that last positive feeling. It was not there. The marginal landing zone that somehow has caught barrels and made survive a few suicide attempts, couldn’t give me confidence to sit in my boat and pull off the line.

Some drops are just meant to haunt you for the rest of your life. I heard once, “sometimes it takes more courage to walk away from a drop than to run it.”

Some dreams are just meant to be dreams.

Ortiz, you might recall, once conquered the 189-foot Palouse Falls in Washington, and that was bigger than Niagara Falls by 17 feet. He’s also successfully descended the 130-foot Big Banana Falls on the Alseseca River in Veracruz, Mexico.

But Ortiz’s fans on Facebook understood. They lauded the decision, and some offered pretty good reasons as to why Ortiz shouldn’t even be considering such a descent.

Wrote Ginger Cole Turner: “Great decision. I like the thought that some dreams are meant to be only dreams. We’d rather have you amongst us!”

Jean Boudreault wrote: “There’s a picture of the falls when there was no water going over them. It’s nothing but rocks in the landing zone. Doesn’t matter if its twenty feet or a hundred feet the landing is the prob.”

See the photo of the waterless falls here.

Rick Troutman wrote: “Yeah Rafa. Life is always about choices and you have made a very important choice today … congratulations on making such a wise one that of which may inspire others to do the same. Continue this wisdom in your future.”

And Kyle Kovalik wrote: “Good man. I think it took as much courage to walk away as it would have to run it, in it’s own way. Looking forward to more of your exploits as always.”

Spread the love  “Life’s most persistent and urgent question is, END_OF_DOCUMENT_TOKEN_TO_BE_REPLACED