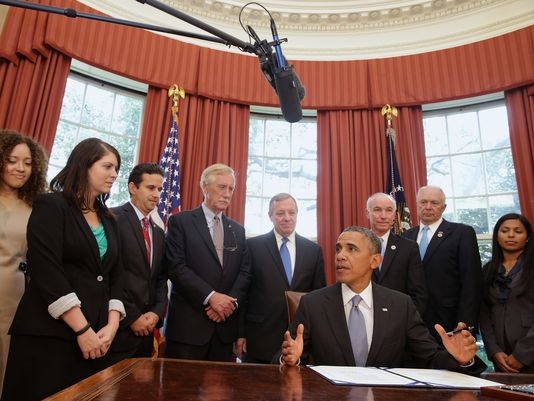 A law touted by politicians as their way of keeping money in the pockets of the nation's college students will instead funnel more than $700 million in additional profit into the federal government's wallet over the next 10 years, a new analysis shows.

The law, regulating interest rates for federal student loans, was passed by Congress and signed by President Barack Obama this summer. It was hailed by politicians on both sides of the aisle as a win in the campaign to combat a rising tide of student loan indebtedness.

Though the law will accomplish that in the short term, it also guarantees profits for the government every year for the next decade and, starting in 2016, increases those already high profit levels, a mid-August report from the nonpartisan Congressional Budget Office shows.

"As soon as the interest rates begin to go back up, this deal ends up worse for students and their parents than if they did nothing," said Jessica Thompson, the senior policy analyst for the Institute for College Access and Success. "(The government) is absolutely making more money because of these changes."

In total, the CBO projects the government to clear $175 billion in profit over the next decade on student loans.

The CBO analysis comes as millions of students and their parents are signing loan documents heading into fall.

It also comes as Obama, once again, hits the road with a plan to lower college costs and decry the rising levels of debt students carry upon graduation.

A report issued in mid-August by the U.S. Department of Education shows that 57% of students received some sort of federal aid, and 41% of all undergrads had taken loans, up from 35% four years ago. The average debt for a college graduate in Michigan is slightly more than $26,000.

Nationally, there's more than $1 trillion owed in student debt — more than what Americans owe on credit cards — with more than $180 billion of it in some type of default, according to government data.

"If everyone else is making a killing off of us, I'm not the least bit surprised the government is angling to rake us all over the coals," said Nick Townsend, a senior at Ferris State University.

It's going to take both Jennifer and Savannah St. Pierre of North Branch taking out loans to get Savannah through her junior year at the University of Michigan-Flint.

Under the law passed this summer, both will save a little bit from what they would have paid in interest rates. But if they continue to take out loans in subsequent years, they are likely to pay more.

The law set rates for all the loans at different levels, but based them all on the 10-year Treasury rate and allowed rates to change each year.

For loans taken out last school year, the rate for subsidized Stafford loans was 3.4%. This year, it's 3.86%. However, without some sort of congressional action, that rate would have been 6.8%.

Because this year's rate dropped under the new law, politicians were quick to praise themselves.

"It is an encouraging step forward in our effort to keep college affordable," Education Secretary Arne Duncan said in a statement in July.

"This is a win for students, families and taxpayers," he said in a statement.

But the CBO analysis shows it's only a short-term win for students and families.

While the CBO projects profits for the government each of the next 10 years, it shows that starting in 2016, the profit level will increase. The CBO's projections look at how much money the federal government will have to subsidize the program. A negative subsidy exists when there's more money coming in than going out, CBO officials and financial aid policy experts agree.

The CBO projections show an average subsidy rate of just over negative 20% for each of the next 10 years. That means the government will have 20% more coming in than going out. That's an increase of 2 percentage points over what would have been coming in had Congress not passed this law.

The government will particularly increase its profits on parent loans, with an average increase of 9 percentage points each year between 2013 and 2023.

How did it happen?

As a July 1 deadline to stop the interest rates on subsidized Stafford loans came and went, a number of plans were floated by members of Congress and the Obama administration.

They ranged from just freezing rates at the lower rate for a year to a complete overhaul of the system.

But in the process of coming to a compromise plan, it became clear that whatever was passed had to be revenue-neutral, several experts said. That meant the plan had to at least match the profit levels projected by the CBO for what would happen if rates had increased on July 1.

Making that profit stay shifted a lot of the burden onto parents and graduate students, Thompson said.

"Unfortunately, this is a permanent change," she said.

Sen. Carl Levin, D-Michigan, said he voted for the plan because it promised relief to students, at least in the short term.

"We stopped the increase in interest rates," he said Wednesday. "We kept that cap where it was for the next few years, and then it's gradually going to go up to a certain point. Do I think we ought to make money (on student loans)? The answer is no. That wasn't the alternative that was presented to us."

Sen. Debbie Stabenow, D-Mich., had pushed a plan to freeze the rates at 3.4% for subsidized Stafford loans and allow more work to be done on loans and the federal government's role.

When Erica Murphy graduated from Wayne State University in 2009, she did so with student loan debt. This fall, she and her daughter, Paige, are both adding debt to help pay for Paige's freshman year at Saginaw Valley State University.

"I owe about 40K, and now here I am having to borrow money to pay for my daughter's education," said Erica Murphy, a Taylor resident. "There should be a better, more affordable way to finance an education."

That's the feeling of many who feel trapped into borrowing money by ever increasing college costs.

"The price of tuition at big public schools is outrageous, and the price of books keeps climbing into the stratosphere," said Will Huff, a graduate student at Arkansas Tech University. "I think the USA should find a way to lower the price of education, and by no means should the government profit off of the students."

The debt can be crippling to young graduates, keeping them from renting apartments, buying cars and beginning their professional lives, many said. Having a portion of that debt being tied to federal government profits is frustrating, they said.

Valerie King, a senior at Northwestern University, will graduate with more than $20,000 in federal loan debt, she said in an email.

"As far as I'm concerned, it's the government's job to make sure that money is never a factor in one's decision to go to college. A plan to profit from student loans suggests that they're in the business for their own good and not the people's good."

Spread the love
Which Way, Ibadan Southwest LG Constituency 1? by Oyetunji OlunloyoSpread END_OF_DOCUMENT_TOKEN_TO_BE_REPLACED
Previous Post In a word, what does March on Washington mean to you?
Next Post Dog fighting crackdown nets 12 arrests in 4 states