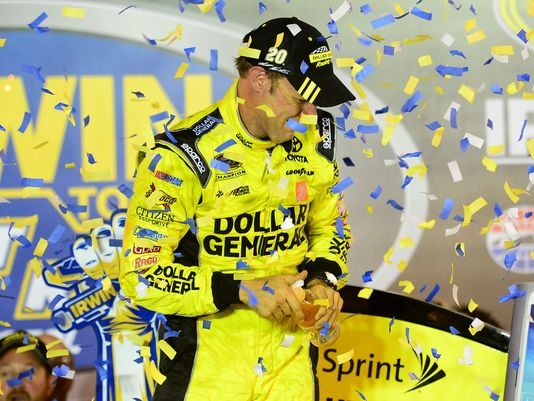 They bill Bristol Motor Speedway as "The Last Great Colosseum," a place where modern-day gladiators do battle in heavily-armored stock cars.

It's why more than 100,000 people came to the mountains of eastern Tennessee on Saturday for the annual night race and why almost all those in attendance figured Kasey Kahne might send race leader Matt Kenseth spinning in the final laps when he had the chance.

After all, Kahne had been wrecked four times by Joe Gibbs Racing cars this year — including Kenseth — and this seemed to be the most opportune moment for revenge.

But Kahne did no such thing. Instead, he tried to win the race with a clean pass over a thrilling final 12 laps, but Kenseth held him off for the win.

It was Kenseth's fifth victory of the season — a Sprint Cup Series high — and left fans wondering what it would take for Kahne to ever retaliate.

"I think at the end of the day, I just don't wreck people," Kahne said afterward.

Kahne had the faster car — both he and Kenseth agreed on that point — but Kahne couldn't quite get past the No. 20 cleanly.

"I would have wrecked probably both of us. I just tried to pass him as clean as I could and race him as hard as I could, and I thought I had him at one point, had a good run and tried to slide across, and he just kept position.

"I just didn't clear him. I just didn't get it done. I'm upset with myself for not figuring out how to win tonight because I clearly had a better car at the end of the race."

Kahne had chances, certainly; the two drivers were side-by-side on several different occasions and even rubbed doors at one point.

But Kahne lived up to his reputation as a clean racer, which is exactly what Kenseth expected would happen.

"We've raced each other hard a lot of times, but I feel like we've always been fair with each other," Kenseth said, adding that any rift between he and Kahne was "blown out of proportion."

Kahne, though, had singled out Kenseth as racing him particularly hard during an Aug. 14 teleconference with reporters. He said history with Kenseth was "definitely on my mind" and seemed to suggest he was tired of coming out on the wrong end.

"He just didn't lift and wiped us out and those kind of things are discouraging because that's not how I race," Kahne said.

Still, that wasn't enough for Kahne to take his revenge.

"I needed a win bad, but I also needed a finish, and I just didn't do anything crazy," he said.

But he could have, and Kenseth certainly recognized the possibility. He just wasn't going to fret about it as the two fought for position while the laps wound down.

"The only car you can drive is your own, and I looked out the windshield and I raced as hard as I could race pretty much all night," Kenseth said. "If somebody decides to run into you or to do something to you, there's not really a lot you're going to do about it."

Previous Post Get better photos from your smartphone
Next Post In a word, what does March on Washington mean to you?