Steven Gerrard: Wayne Rooney has confided in me 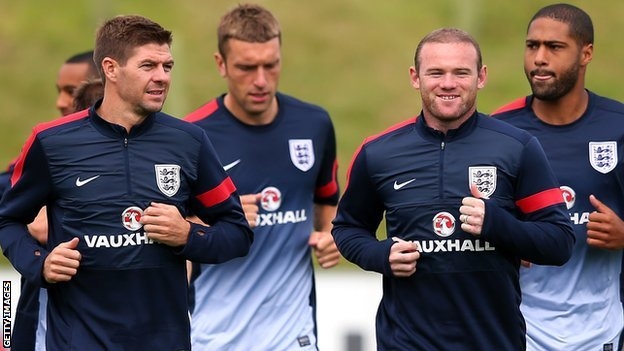 "But it is the same old Wayne Rooney in training; he looks good, scoring goals. He is certainly ready to play. He needs these minutes for his confidence and I am sure he will be itching to start."

Rooney, 27, has been linked with a move away from Manchester United and Gerrard said he had spoken to the former Everton striker about his situation during the build-up to the match at Wembley.

While he would not reveal details of the conversation, Gerrard did stress the importance of Rooney to England's cause.

"It wouldn't be fair on Wayne for me to talk about that conversation, but of course I am close to him," said the midfielder.

"But for me it is all about how Wayne is feeling for tomorrow's game, and I am sure he will sort the other stuff out."

Rooney's position at Old Trafford has been a source of uncertainty since it emerged he had told Sir Alex Ferguson of his desire to leave United in May, following a season in which he played second fiddle to Robin Van Persie.

Chelsea have had two bids – the last of around £25m – rejected by United, and the Premier League champions have now resolved to reject all further offers from Chelsea on a point of principle.

The United hierarchy are understood to view the potential sale of Rooney as a sign of weakness and they are determined not to simply cave in to player power.

That hardline stance would appear to leave Rooney facing the probability of seeing out his contract at Old Trafford, even if he remains intent on leaving the club.

Gerrard, 33, said the match against Scotland, whom he described as "local rivals", was one players on both sides were relishing and the captain insisted neither side would be holding back.

When asked if Liverpool manager Brendan Rodgers had limited his involvement in the match, Gerrard said: "I am sure [manager] Roy Hodgson has had a call from every Premier League manager asking for us to play as few minutes as possible or wanting us to come back fully fit.

"But the Premier League managers have got to understand we're here representing our country, it's a big game, and we all want to play as many minutes as possible.

"There'll be no holding back because it's a big game and we want to win."

Wednesday's match comes just days before the start of the new Premier League season, and Gerrard, who is set to win his 103rd cap, views the contest as one England need to win in order to build momentum ahead of vital World Cup qualifiers with Moldova and Ukraine next month.

"It's a World Cup year and we've got four very important World Cup qualifiers not too far away," said Gerrard.

"But this is a big game – it's going off with a bang. All the players are excited and looking forward to an exciting year.

"We play against these guys week in, week out, so it's a good test for us. Going into the important games in a couple of weeks' time it's important we go in feeling confident and on the back of a good performance."

Spread the loveOf all the updates that have been given END_OF_DOCUMENT_TOKEN_TO_BE_REPLACED