Maiduguri (Nigeria) (AFP) – The Nigerian schoolgirls kidnapped by Boko Haram were taken to a stronghold of the Islamist group, parents said on Wednesday, as the military confirmed that 129 students had been abducted.

Defence spokesman Chris Olukolade, who had earlier given the figure of those kidnapped in northeastern Borno state late Monday, later said all but eight had been released, but that was disputed by sources in the region and could not be independently confirmed.

"The principal of the school confirmed that only eight of the girls are still missing," he said in a statement.

He separately told AFP that most of the students escaped immediately after they were taken by the Islamists, a claim that was not consistent with multiple witness and official accounts.

A senior security source in the region told AFP late Wednesday that more than 100 girls remained in captivity.

Borno's Governor Kashim Shettima had earlier told journalists that only 14 of the hostages had escaped so far and offered 50 million naira ($300,000, 215,000 euros) to anyone with information that leads to the others being rescued.

The mass abduction in the Chibok area of Borno state came just hours after a bomb ripped through a packed bus station on the outskirts of Abuja, killing 75 people, the deadliest attack ever in the capital.

The bombing was also blamed on Boko Haram, a group whose five-year extremist uprising has shaken Africa's most populous country and top economy. 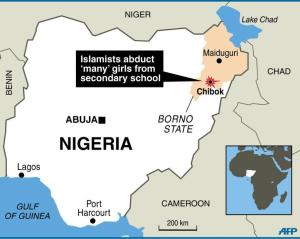 The state governor voiced outrage at Boko Haram, a group which says it wants to create a strict Islamic state in northern Nigeria.

"In Islam, women and children are spared during war," Shettima said.

Three of the girls who escaped and returned to Borno's Chibok area briefed locals about the attack, said Lawal Zanna, whose daughter was among those abducted.

"The girls told us they were taken to the Konduga district part of Sambisa forest by their captors," said Zanna, referring to an area where Boko Haram is known to have well-fortified camps.

The girls said they ran after getting permission from the gunmen to use the bathroom and were helped back to Chibok by nomadic herdsmen from the Fulani ethnic group.

"My daughter is not among the three lucky girls but their escape and the news on the whereabouts of the other girls has given me more hope," Zanna told AFP.

President Goodluck Jonathan has summoned his top security chiefs to a meeting on Thursday to discuss "the security situation in the country" in the wake of the Abuja bombing and the kidnapping, his office said. 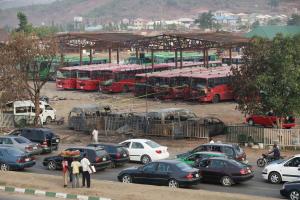 Cars drive past as onlookers inspect the scene of an explosion at a bus park in Abuja, Nigeria, Tues …

"Schools are, and must remain, safe places where children can learn and grow in peace," he said.

Boko Haram, whose name means "Western education is forbidden", has repeatedly attacked schools and universities in an insurgency that has killed thousands of people since 2009.

Intensifying violence in the group's northeastern base has forced school closures across the region, including at Chibok, but the girls were reportedly told to return this week to write end-of-term exams.

Witnesses said the gunmen killed a police officer and soldier in the shootout and ultimately forced their way into the school.

They then forced the girls outside and loaded them onto trucks and drove off into the bush of the remote region.

Jonathan and the military have sought to portray Boko Haram as rapidly losing strength thanks to a massive offensive in the northeast launched last May.

But a major bombing just a few kilometres from the seat of government in Abuja and another attack targeting defenceless students has underscored the serious threat the Islamists continue to pose.

Jonathan has faced mounting criticism over his failure to stem the violence, as he seeks to portray Nigeria as a country on the rise.

"Kidnapping young children is exactly what makes this group of terrorists in Nigeria among the worst in the world," Maku told journalists in Abuja.